Sometimes over the course of managing a large user base, you’re going to have issues with a particular user. Maybe it’s disciplinary, a political disagreement, or their insistence that you should check out the new Morrissey record. Either way, it’s soon gone from your mind.

For a Bison Case, this sticks around much longer. They’ve convinced themselves that this disagreement was an event of colossal importance. A Bison Case not only thinks of you as their mortal enemy, but is certain that the enmity is mutual. Long after you’ve forgotten about their existence, their resentment has festered and grown. This user will inevitably have some reason to interact with you, and will start their post with something that boils down to “Look, I know that you and I are mortal enemies…”

…at which point you can respond with the words of the late, great Raul Julia in his last role as M Bison in Street Fighter: The Movie. “For you, the day Bison graced your village was the most important day of your life. But for me? It was Tuesday”. Replace “graced your village” with “closed your thread” where appropriate. 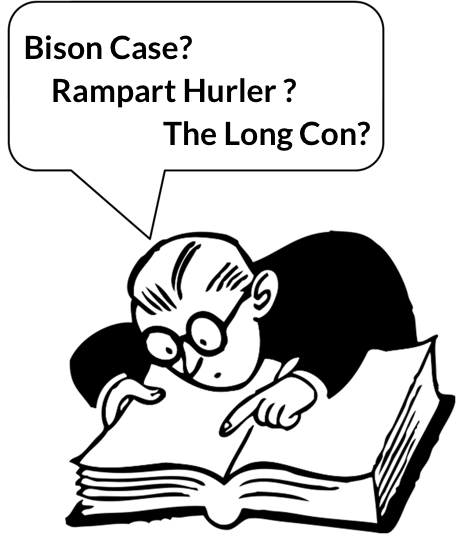 Spammers can be tricky, and are always thinking of new ways to get around your guard. One of the best defences you have against spammers is vigilance on the part of your users. Unfortunately some users can be a little… keen. About once a month a user will report a suspected spammer who, on closer inspection, has had an account for ten years and has dozens (sometimes hundreds) of posts.

When faced with a suspect who is either a false positive or has put a remarkable amount of effort into their backstory, my moderators will invariably nod sagely and declare “It’s the old Long Con…”. This can be used in any situation where a user accuses another of a plot that would require such a preposterous amount of fiendish plotting that it’s vanishingly unlikely to have taken place.

Note: It’s worth noting that on one occasion I used this joke, laughed smugly and later discovered that it was, in fact, a spammer playing a long con.

Some trolls are cunning. Some trolls are clever. Some trolls are insidious. The Rampart Hurler is none of these things. He displays a brute force attitude to despoiling your forum, assuming that if he (or she, but frankly I’ve yet to see a female version), keeps performing the same behaviour enough times, sooner or later the administrative staff will capitulate. This is, of course, nonsense. It takes two clicks to ban a user, but they have to go through the trouble of making a spam email address and re-signing up to your site every time they want to have a fresh go at Taking You Down.

The only real weapon this user has in hurling themselves against the ramparts of your forum is your apathy. As long as you can be bothered to keep banning them, cleaning up their posts and ignoring their pleas for attention, they’re no threat. Tedious, certainly, but scarcely worthy of their own jargon.

This concludes my contribution to the exciting world of jargon. If you have any more suggestions, feel free to hit me up on Twitter or leave a comment below.

Guest post by Patrick Groome. Patrick is the Administrator of the Penny Arcade forums. Penny Arcade is one of the most popular and long running gaming webcomics and organizer of the PAX gaming conference.