[Community] When is a Forum Really Dead?

[Community] When is a Forum Really Dead?

For this reason, I was shocked by the recent announcements made by both Lego and IMDB that they were closing their forums. From the initial news, it sounded like both companies were giving up on community altogether. While that remains to be seen, I think there are some interesting, and important lessons to be learned from both these giants.

I should also be clear that giving up on a forum platform is not the same as giving up on your entire community. It’s sometimes too easy to mix the two. Forums are a software platform, while a community is more amorphous, one that exists among your passionate fans, customers, and enthusiasts.

The truth is – you can send your community to any place you like. Of course, I may be biased in believing that forums are the best place to do that, but I’m not going to sell you on the benefits. You’re reading this here, so I kind of assume you understand why forums are beneficial. In case you weren’t convinced, you can easily check out our thoughts on the subject here.

So what has possessed IMDB and Lego, two giants in their respective industries, to call it quits? And what does their future hold?

Let’s take a look at these two cases. 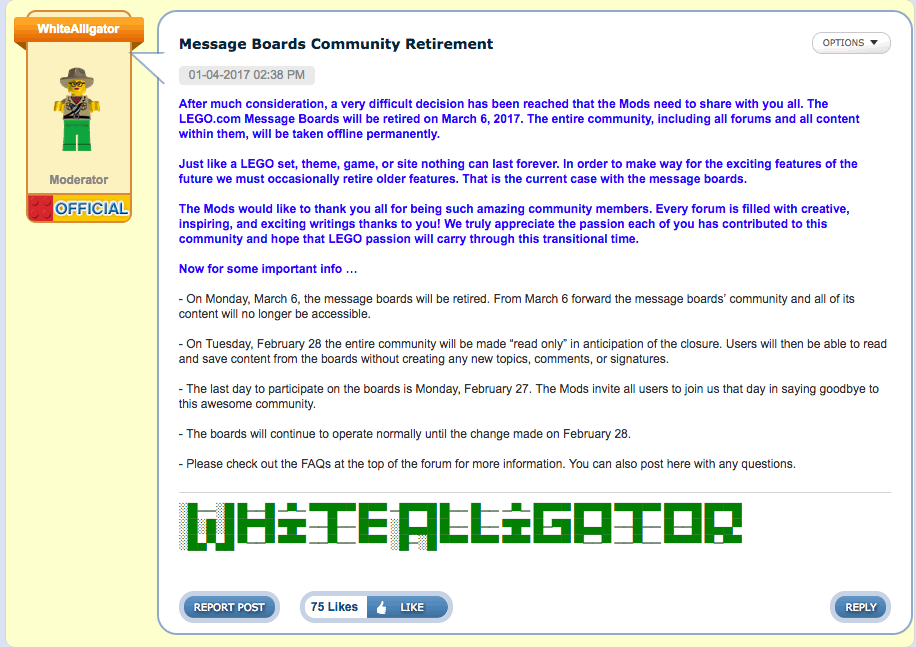 The Lego Message Boards are (were) a huge success by any definition. People were engaged and sharing content with one another on a daily basis. It had the kind of activity most forum owners would dream of, with an amazing, well-known, and respected brand behind it.

In their announcement, the moderator team remarked on the closing:

“Just like a LEGO set, theme, game, or site nothing can last forever. In order to make way for the exciting features of the future we must occasionally retire older features. That is the current case with the message boards.”

They made a business decision not to keep their message board, or upgrade their technology. Certainly any of a dozen or so modern platforms could give them exactly what they wanted.

Or so I thought.

As it turns out, LEGO had plans for something different.

A few weeks after the announcement came, the news came down that a new Lego Life App, aimed at children under-13, was being released.

Essentially LEGO created a walled garden for children, a safe space. Only with parental permission will they be allowed to join. Most commenters have noted that essentially this app is similar to “Instagram for Lego.”

What can’t be denied is that it’s definitely a more modern way to engage with their young customers.

The current message boards did not let people share links or images. With this new app, this is no longer a concern. The closure seems limited only to their public message board. Lego is not closing their ideation platform, which is also as active as ever.

What seems to have hurt many on the message board is that now anyone over the age of 13 isn’t part of the new “official community” that Lego is building. This doesn’t mean the community is gone. They will be scattered to other third-party forums and spaces. As is the case with any forum that closes, they will still find a place to group together, just not under the auspices of the brand.

LEGO’s statement is also vague enough that there may be a future app for adults in the works, or maybe something else planned for this large segment of the LEGO community. It seems strange that these plans are not being shared before people scatter. It’s also possible someone at Lego has crunched the numbers and decided that there just isn’t justification for supporting a forum for this segment of the fan base.

Change is difficult. And those who know how hard it is to build an active forum must at least give them a nod at being big risk-takers. Only time will tell if it works out or not.

Here are some lessons from Lego forum closing:

Closing a forum can cause some ill-will towards your potential brand ambassadors. Companies pay thousands of dollars to build up such an army of goodwill, so throwing it away seems like a waste.

IMDB – The Grandfather of the Film Community Going Dark 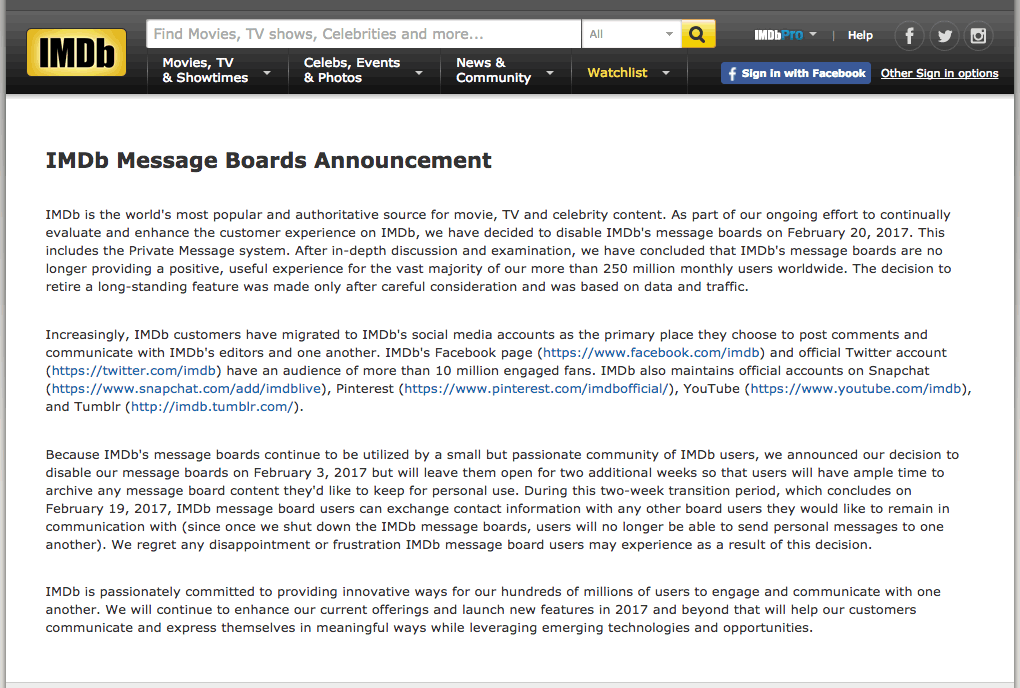 After 15+ years, the message boards of IMDB are going dark. And in this case, the reasons given by IMDB seem to be what we’ve heard from many companies in the last few years.

“Increasingly, IMDb customers have migrated to IMDb’s social media accounts as the primary place they choose to post comments and communicate with IMDb’s editors and one another.”

Certainly that sounds plausible. And by no means do I have access to their data, but to the casual observer, it seems that their boards are as active as ever.

In this case, they seem to be pulling the plug because they somehow managed to survive this long without a community strategy.

There is a ton of great content on their boards, yet few ways to keep trolls and other offensive content in check. Certainly if there was a will, a platform change, and a comprehensive effort to enforce rules, they could have turned things around.

The amount of valuable content on these message boards is truly staggering. But I suppose that’s to be expected when you’re the go-to website for movie data for over 15 years. The site is full of information, debate, and passionate discussion among film professionals and ardent fans alike. I’m not sure you can find the same information anywhere else.

Most surprisingly, they are also killing off their support forums. This is a strange move, and opposite of what we see most businesses doing, which is to increasingly rely on their forums for self-serve customer support.

While I’m certain these changes are not without reasons, I suspect they will quickly realize how important the community was with regard to their organic site traffic. If nothing else, they will certainly see a drop in an important SEO metric – time spent on their site.

We won’t even get into the massive SEO hit they’ll take when they do finally pull the plug.

These message boards are so busy it almost boggles the mind that they would kill it. IMDB is an Amazon company, so we know it’s not for a lack of money. I’m left with the suspicion that it’s a lack of will to put in the time needed to manage the community properly.

Certainly the IMDB community will continue elsewhere, but by killing the forum, they seem to think that their own community cannot police itself. This is also why some blogs have killed their comment sections.

When I see such a total shut down, I always get concerned. I’ve written on this before. There are solutions out there to help.

It’s important to really understand that it may just be a combination of philosophy and technology letting you down. Getting it fixed properly, can help right your ship.

Everyone says when they shut down their boards, that they’ve thought about this long and hard, but they never consider how difficult it will be to woo people back once they realize it was a big mistake and their audience has left.

Own Your Audience, Don’t Let Others Own Them

Why keep your hard-earned audience on third-party platforms such as Facebook? Remember, you don’t own the audience that you engage with on social media. Sure Facebook is king now, but remember MySpace? Just like how MySpace died, things could change in the near future with Facebook.

If you keep engaging with your audience off-domain, you will eventually face the fact that you are at the mercy of these platforms. It boggles my mind that social teams would invest time and energy into platforms over which they have little to no control, when they could engage directly on their own terms – such as on branded forum.

If you already have an active community and are having problems managing it, there are numerous solutions. It can be as simple as engaging your community to find volunteer moderators, enforcing existing rules or hiring professional external community management. It’s one thing to close a forum because it’s dead, but a totally different ballgame when you kill off a large active forum.

I wanted to sneak these guys in. Why? Because they understand community and the power of forums. Even though their fourth quarter pre-release earnings showed stock and investor confidence sitting at all-time lows, they are doubling down on community.

Fitbit has 23.2 million active users in their community and they don’t take them for granted. In the most recent earnings call, CEO and founder James Park said:

What Fitbit realized is that the more engaged users are in the forum, the more they use their product. These community super-users also refer friends and family leading to increased usage of their product.

In this case Fitbit has recognized that shared community experience enhancements are the key to building a long lasting platform with a base of loyal customers.

What Fitbit really gets is that they do not view their community as a cost, but rather an investment. That investment is a way to increase value and sell more Fibits. Even more importantly, they are using community to reduce their costs by recognizing that engaging their fans and supporting them, will reduce their customer churn and increase product enjoyment.

They recognize that community is, and will continue to be, an important part of their success in a crowded market. A lot of companies can learn from them about the power of harnessing their community forums. Fitbit is also a great example of what can happen when a company, from the CEO down, just gets it.

With any luck more businesses will learn these lessons, and we will see active forums receiving continued investment rather than being shut down!

Building a Business Case For Your Community Initiative