Why Vanilla Doesn’t Have Nested Comments

Why Vanilla Doesn’t Have Nested Comments

Also known as “threaded” comments. Some sites will let you indent replies ad infinitum. In other cases some will allow only a single level of indentation.

There are a few problems with nested comments. The first is they encourage the comments to split into several unrelated discussions. This is bad for many reasons—mostly it reduces user participation. The second is that it doesn’t look good and can break your page design. Finally, nested comments can encourage bad behaviour where people that just have to get the last word in will argue endlessly because the comment structure encourages it.

Early forum software used nested replies and some people still prefer this format. These are probably the same people who think you should still be able to buy leaded gasoline.

While a flat comment structure looks better and tends to keep the discussion on topic, it has one major drawback. It makes it harder for someone to reply to a comment that is not the last one in the discussion. The most common thing you’ll see with flat comments is the user referencing another comment by their username. Some discussion platforms (such as Vanilla)  support @ mentions that trigger a notification to that member when they are mentioned like this. Another common approach is quoting a part of a previous comment. Quoting has the added benefit of being more specific in your reply and adding more context to the comment.

Deciding how to sort comments is the other controversial aspect of comment structure. Most comment threads are sorted chronologically from first to last. There isn’t much debate about this sorting order for discussion forums or blogs.

Q&A sites, however, often sort based on number of votes. This makes sense in some cases, but not in all cases.

For support type Q&A sites, usually the best answer is the only answer that matters. For example, if you are a developer on a tight deadline, looking for an answer on Stack Overflow, you don’t want to scroll through a bunch of answers before you get to the best one. You want it clearly displayed up top. Quick in, quick out.

Sorting answers by score can create a winner takes all dynamic which can discourage community spirit and participation. Some types of questions don’t have a “best answer” and are instead better answered with some debate or opinion. Sorting by votes doesn’t encourage the exchange of opinions as it breaks the flow of conversation. Also, it can be discouraging for someone who spent 20 minutes putting forward a thoughtful answer to see their answer at the very bottom of the thread or collapsed among “other answers”. 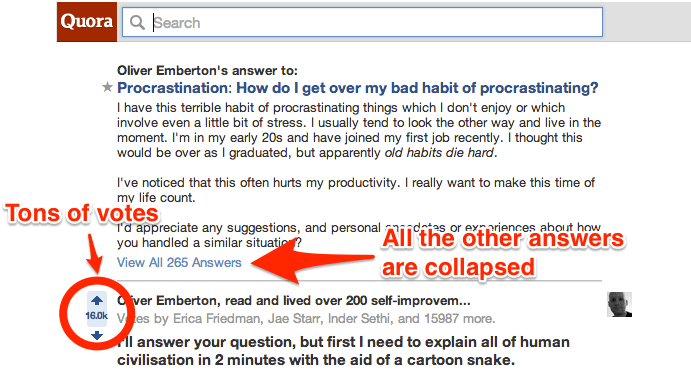 Another problem with sorting answers based on votes is that it can be confusing to read a thread that once flowed chronologically but was then rearranged as people started voting on answers. It’s common to see a comment was originally up top pushed to the bottom of the page, completely losing context. You can see an example here, where trying to follow the conversation is very hard.

Vanilla’s recommended setup for Q&A is to display answers “accepted” by the person who asked the question up top. Some of our customers make the “best answers” stand out more by applying CSS – like a border and background colour. 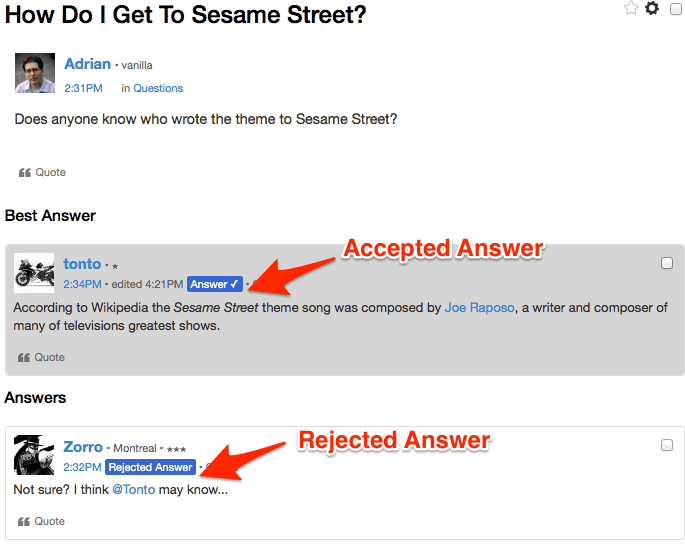 Comment structure is still evolving and it’s clear that different types of communities need a different type of structure. One last example is Gawker. They have experimented with a few commenting structures, usually trying to clean up the pitfalls of nested comments. Their latest pinboard-style layout is worth a look. 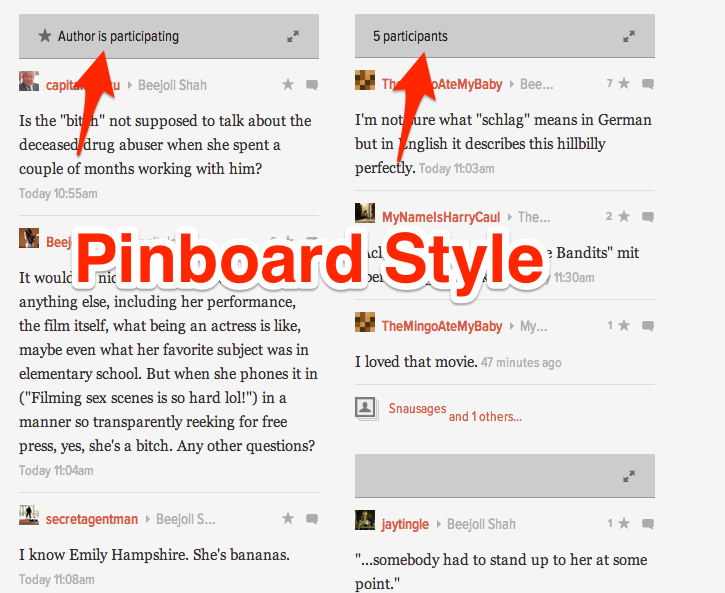 When it comes to commenting structure, there are many ways and flavours to set up your forum. Just as a community will have it’s unique personality, so will your comment structure. Which do you prefer? Flat or Nested? How about sorting your comments. Do you have a specific preference? Let us know in the comments.