The Road to Financing

We officially began looking for funding on August 7th, 2009 at the TechStars investor day in Boulder, Colorado. Investor day was, of course, the culmination of months of work on our product and our pitch at the TechStars program. We were well received, and had a fantastic day meeting investors from across North America. One of the investors we met that day would end up leading our financing round (John Stokes from Montreal Startup), others whom we had already met through the TechStars program would end up following on with a significant investment (eonBusiness in Denver), and another investment group in the room would also end up joining the round (Norseman Capital in Denver).

Following the end of our time at TechStars, I went into full-time “find investors” mode. Using the little amount of money remaining from TechStars, I traveled across North America to New York, San Francisco, and Montreal for meetings with investors I had met on investor day. Before going into TechStars, I thought that this part of the process would be torture, but I must admit that I had a lot of fun meeting with everyone and telling people about Vanilla. 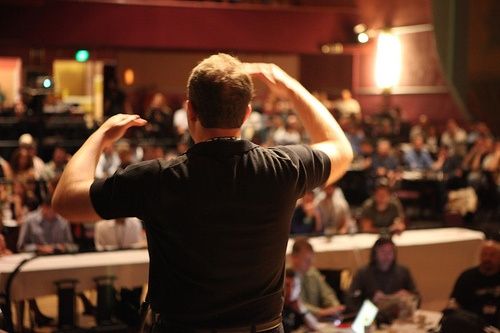 When you walk into a room of investors, you never know how things are going to go. Some people don’t have a clue what your company does, others think they know it better than you do and are biased in ways you cannot fathom, and others truly do have a fantastic understanding of your idea. On September 30th, 2009 we pitched to a room full of investors at the Microsoft campus just outside of San Francisco in Mountain View, California. Once again, we met a ton of amazing investors and I was once again set off in motion arranging follow-up meetings that would take up weeks of energy and devotion. One of the people I met that day was Eric Klein of Klein Venture Partners. Eric only had a few minutes to talk before running to another meeting, but he was excited about Vanilla and wanted to speak with us further. I didn’t know it at the time, but Eric is the VP of marketing for Java at Sun Microsystems. The open-source Gods smiled upon us that day, because Eric later invested in Vanilla, and also came on our board of directors and agreed to devote significant amounts of his time to helping Vanilla succeed. He has already proven to be a fantastic asset, and we couldn’t be happier to have him involved.

After meeting all of these investors, I can honestly say that you can never tell how things are going to shake out. When I first met John Stokes, he asked if we’d consider moving to Montreal instead of trying to open up shop in the US. I told him straight-up that we weren’t interested. At the time, we had our minds and hearts set on staying in Boulder. It was only after I further spoke with John over telephone and email, and then Todd and I both went to Montreal to meet with his partners, that we became very serious about Montreal.

You may have read about us in the Wall Street Journal two weeks ago in an article about the Startup Visa movement in the US. It was painful for me when that article came out, because it was at a time that I couldn’t openly speak about our funding round and how excited we were about it, our investors, or moving to Montreal. And to them it must have read like we really didn’t want to be in Canada. The reality, however, is that we had wanted to be in the US (Boulder, specifically), and we even had other offers from investment firms to lead our round that would have allowed us to stay in Boulder. In the end, the benefits of being Canadians operating a business in Canada were too great. There are no visa issues, there are all kinds of government incentives, there is a fantastic community of entrepreneurs in Montreal, not to mention across Canada from Toronto to Vancouver (who have been emailing us saying we should stay), there is a thriving open-source community ever-growing in Montreal, and the partners at MSU (Montreal Startup) are smart, friendly, helpful, and even have other open-source investments, and a keen understanding of open source.

We made the decision to go with MSU months ago. Since then we’ve been working with lawyers on both sides of the border getting our financing arranged. This was a process that I was not prepared for. It has been expensive, time consuming, and exhausting. However, we come out of the closing of our financing ready to move ahead at full-steam. Now that we have the resources, we want to kick Vanilla into overdrive by ramping up sales & marketing, development, and delivering to our customers.

We are extremely pleased to announce that we are now offering our first two premium upgrades on the hosting service at VanillaForums.com (custom domains and ad-removal), and we will be releasing our third upgrade (Custom CSS) later this week. If you are a customer, we are always available, and we want your feedback. Feel free to contact us any time at: support [at] vanillaforums [dot] com.

I have sold my house, and I will be heading to Montreal in the first week of February. We will be opening an office in Montreal shortly therafter, and we are now hiring. If you are a developer in Montreal, or if you are a marketing/sales person with a great understanding of SEO and ad-targeting, contact us: jobs [at] vanillaforums [dot] com.

Since making the decision to apply to TechStars, our lives have completely changed. We have a network of mentors and colleagues who are constantly rallying behind us, we closed our first round of financing with helpful, friendly, and supportive investors, and we finally have the resources to take Vanilla where it needs to go. Now, we just need to deliver.

On a closing note, I should mention that if you are an entrepreneur and any of this sounds like the direction you want to go, they are now accepting applications at TechStars in Boulder. It changed my life, and it could change yours, too. If you have questions about TechStars, feel free to drop me an email: mark [at] vanillaforums [dot] com.