Ranks should not be confused with Roles. Roles allow you to set general permissions, for example restricting access to certain categories. A member can have multiple Roles but only one Rank. Ranks are usually earned while Roles are assigned.

To turn on Ranks, enable them in the Add-ons page of your Dashboard. You’ll then see a link to Ranks settings in the Dashboard’s reputation menu.

How Ranks are awarded

By default, Ranks are awarded based on reputation points earned. You can also choose to apply a Rank manually or require that the user have a specific Role.

Assigning a Rank via SSO.

If you’d like to assign Ranks based on some measure of reputation that exists in your own application, you can pass the Rank via jsConnect (Vanilla’s single-sign-on plugin). To assign a Rank on SSO, pass either Rank_Level or Rank_Name. Important, make sure to leave points field blank and select ‘Applied Manually’ under ‘Criteria’.

Displaying a Rank label or icon
To give your community some personality, you can add a custom label or image that corresponds to each Rank. In the ‘Label’ field add HTML pointing to an image or simply type out a text description of the Rank. 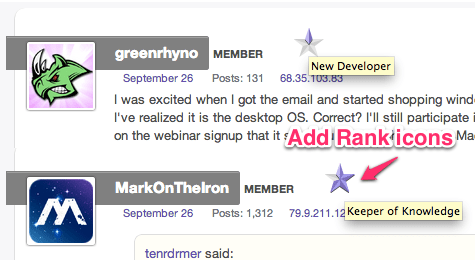 Styling comments based on Rank.

You can enter a CSS class to style anything in the comment block (comment body and profile info). For example, if you wanted to change the comment block background colour for members with the Moderator Rank, you could create a CSS class called ‘Rank-Mod’ and include it in your custom CSS:

Then, edit the Moderator Rank and add ‘Rank-Mod’ to the ‘CssClass’ field.

There are several abilities that can be granted or taken away based on Rank. For example, you might not want an unproven user to be able to add any formatting or add links to comments. You might want to restrict the amount of time that an unproven user is given to come back and edit a post. This is a useful tactic to fight spammers who post seemingly legitimate comments and then come back later and edit them to contain SPAM links.

On the other hand, you might want to grant some cool abilities to members with higher Ranks such as being able to create a signature, create a Poll discussion or use the /Me action.