When MURAL joined the Vanilla platform, they had a great sign up rate but were experiencing a lag in their revisits and member engagement. MURAL Community Manager, Lindsay Olson had expected this and knew she needed to get creative to encourage members with low login and engagement rates to partake.

MURAL, a SaaS company that offers digital collaboration, where team members can be on the same canvas from anywhere in the world, works on the principle of “Put Imagination to Work” and Lindsay is the epitome of practicing what you preach.

Prior to coming to Vanilla, MURAL had no dedicated space for knowledge sharing, or experts, but they’re certainly putting in the work to change that. Ultimately, Lindsay and her team envision a thought leadership space for the community which not only offers members a place to share thoughts and ideas, but for the company to learn from.

How are MURAL Encouraging Community Engagement?

Recently, Lindsay sat down with Vanilla to discuss how the community team wanted to boost  the MURAL community early on with a competition. As a super young community, there was a huge sign up rate but very few people were revisiting. She came up with some super innovative ideas.

Specializing in people and relationships, Lindsay dreamt up MURAL Community Bingo, and let me tell you, it took off!

With 6 years of experience with community management, she knew how effective games can be within communities but she couldn’t have imagined just how effective.

“I knew that a big prize would get our members back to our community, and it worked! We targeted folks who had made community accounts, but had low login and engagement rates. We only got through a FRACTION of our list however, before all the prizes had been claimed.”

The original plan was to market MURAL Community Bingo to a huge list of inactive members over the course of a week, but in just one day, the competition had to close! All of the prizes had been claimed. The MURAL community members jumped at the chance to not only use the MURAL product but to understand the Vanilla platform and its capabilities.

It took just 24 hours for every one of the prizes to be won – 24 hours!! “The response was just incredible – our members absolutely loved Bingo.” Of the list of inactive members, only 15% could be reached before the game had to end but that didn’t matter, the other 85% still wanted to play the game for the mere sake of it!

Lindsay figured that offering a low entry barrier to get Mural community members involved would work best and help to familiarize them with both the MURAL product and their online community. To compete, all you had to do was complete mini tasks such as sending a DM to say hi, or posting a reaction. Vanilla’s customized reactions, adding images and gifs, gamification, and the direct messaging feature were among some of the features. 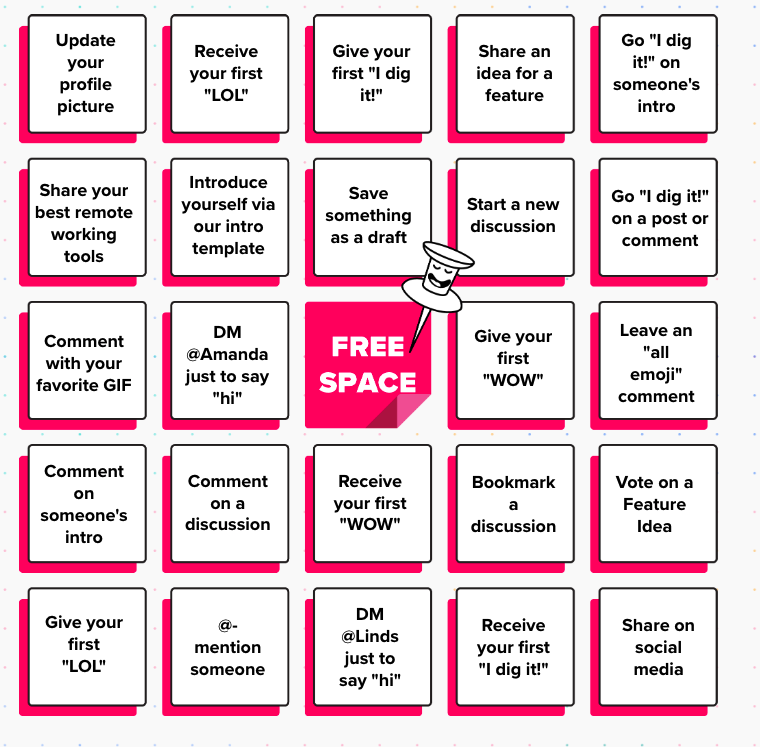 Engagement rates have not only increased but they have also stabilized since the Bingo competition ended.

So what’s next for the MURAL community? Lindsay and the Community Team want to ensure that the other people who didn’t get a chance to play to win, are just as encouraged to come back to the community.

The Feature Ideas section enables Product Managers to actually speak with Mural members – customers can come and speak directly to PMs whenever they have an idea for the MURAL product. Ideation is one of Vanilla’s out-of-the-box features that Lindsay really enjoys and is excited to see members engage with it more and more – “this is one of the things that Vanilla by Higher Logic does really well”.

Other communities even picked up on how great the MURAL community is doing – All-Things-Community crowned MURAL as the “Community of the Week”!

Lindsay’s advice to other CMGRs? “Try everything! There are no bad ideas, even if they seem silly you should just try!” Apart from that? “Play to your persona and your product strengths”.

To say Lindsay and the MURAL Community Team’s initiative was a huge success would be an understatement! We’re so excited to see what’s coming from the MURAL community.

Lindsay Olson is an experienced community builder, strategist, and advocate. Driven by customer-centricity, she takes pride in providing the best virtual spaces possible. As a Community Manager her goals include fostering relationships and encouraging collaboration. In addition to her primary job functions, Lindsay has been recognized by the industry for her commitment to transparency and fun.