When a moderator flags a comment, it is given 5 flags and immediately gets buried and sent to the moderation queue. Of course, moderators can delete or edit comments inline without needing to flag them or send them to a moderation queue.

Negative Reactions received will subtract points from a member’s reputation score. The reputation score is earned for receiving badges and positive reactions. A higher reputation gives the member a higher position on the leaderboard and can give them a higher Rank if that feature is enabled.

To avoid abuse of the Reaction system, Reactions are public by default. Reactions can be made private in the Reactions Advanced Settings in the Dashboard.

Moderation is as much about positive reinforcement as it is about flagging abuse. The Ranks feature displays the earned Rank next to the member’s username and can be setup to give more abilities to members with higher ranks. For example, a higher rank might be required to create a poll or save a signature that gets appended to each comment. 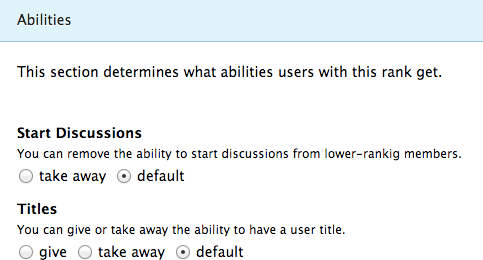 Another form of positive reinforcement is awarding badges to users for positive contribution. Moderators can manually award system or uploaded custom badges. Custom badges are highly desirable because they can’t be earned automatically.

When it is necessary for a moderator to call out a member for violating the community guidelines, the warning system is a good way to makes things more objective and transparent, especially in large communities with several moderators that might not be familiar with each member’s past history. The warning system works like the demerit point system on your driver’s license. If enough points are earned, the member will be jailed (temporarily suspended) or completely banned. Warning points expire after a set amount of time and can be cleared by mods at any time. 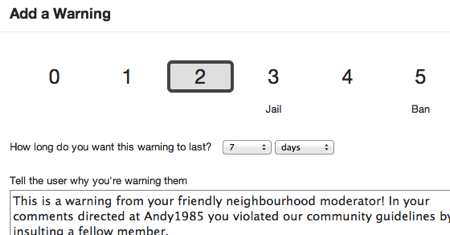 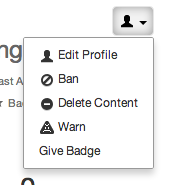 If necessary, members can be completely banned from your community. Members can be banned based on their username, IP address, or email address. Wildcards can be used to broaden the ban criteria but a persistent member will find a way back. Using Ranks with limited abilities for newbies is a good way of frustrating banned members that try to register after having been kicked out of the community. When banning a user, you can optionally delete all of the user’s existing posts. 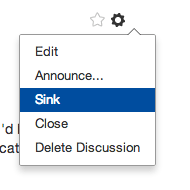 By default, discussions are ordered by date of last comment. Sometimes moderators want to make a discussion ‘go away’ but don’t want to offend by deleting it or closing it to more comments. Sinking the discussion will make it sink down the page as others discussions are updated and created, even if that discussion thread gets new comments.

Trolls are those that get a kick out of bothering others. Often banning a troll just feeds their desire for attention and they come back to the community under a different username. Vanilla’s Troll Management plugin makes the Troll and his content invisible to everyone but himself. Feeling ignored, the Troll gets bored and goes away. 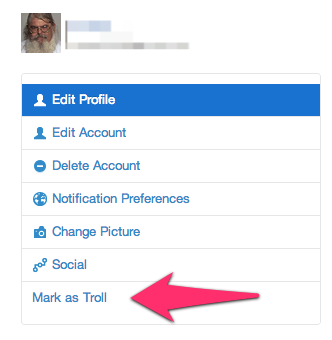 In general pre-moderating every comment made in the community is not a good idea but it can make sense for certain kinds of communities. Pre-moderation is tied to Roles turned on by adding the permission Approval = Required. Pre moderation can be turned off for a user by changing his/her Role or by ‘whitelisting’ the user by marking the user as verified on the user detail on the profile page or by editing the user.

Vanilla has several SPAM management features that deserve a post of their own. These include: