The Facebook data was easy: Facebook published it in a blog post. The forum data, on the other hand, was based on a series of extrapolations from what we know about forum activity on our platform, searches in Google to identify the number of forums on specific platforms, the ratio of these platforms to other platforms, and a bunch of other stuff that is incredibly difficult to explain. As I fumbled my way through the explanation of the numbers, I became more and more frustrated with my own response. Why isn’t there an easy answer to these questions: how many forums are there on the web? how many posts are there on forums on the web every day?

Out of pure frustration, I began a project that Christmas to search and index every single discussion forum on the web, and then historically track the growth of users and posts across all discussion forums and all platforms. We’ve only just begun to scrape the surface and aren’t ready to share the data but we are utterly astonished at how much of the internet is made up of discussion forums. The most shocking piece of information we’ve discovered is that the vast majority of these communities, big and small, are still running on software that was designed over ten years ago – ancient in technology terms.

While many communities on old platforms are still going strong, it is just a matter of time before the membership migrates to platforms that are more engaging and easier to use. Some community managers say that Facebook and other social sites are not a threat to their growth because they are simply echo chambers built around a small group of friends or acquaintances and not around a common interest. The real problem is that purely because of the technology and UI adopted by these platforms, they are more engaging and suck up time that would normally be spent elsewhere. Finally, there are the new players like Stack Exchange and Quora who are adopting the best in reputation, gamification, usability and curation and are encroaching on specific content-verticals – posing a real threat to niche communities on end-of-life software.

Do you know the technology adoption curve? It starts out slowly as early adopters get on board, then sputters, then takes off as the mainstream gets on board. 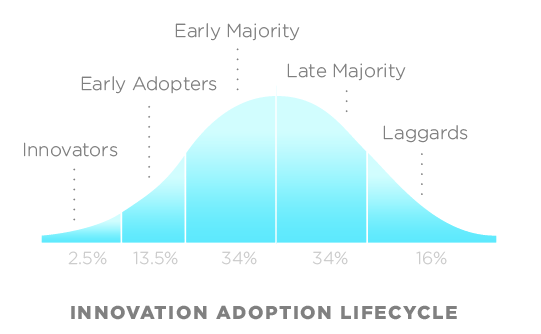 As a community manager, you’ve got to ask yourself: where is my membership on that adoption curve and what am I going to do to keep my community engaged?

The thought of an Internet where social interactions have all consolidated under a small number of despotic companies is not a good one. At Vanilla, we think the web is a better place if it is made up of many strong niche communities, each with their own culture and boundaries. We’re helping communities adopt modern usability, gamification, reputation and curation technology which results in higher engagement and growth. We’re offering communities the tools they desperately need to maintain their well-deserved place in the discussion ecosystem.

What will you do? Migrate your forum to a modern platform or face extinction?