Moderation of an active community can be a tough job. Moderators need to keep track of members’ behaviours and act objectively. The new warning system will help. It works like demerit points on your drivers license. If you accumulate enough points within a time period, you get suspended or banned. Here’s how it works:

1. Select ‘Warn’ from the ‘Edit Profile’ drop down on the offending member’s profile page. 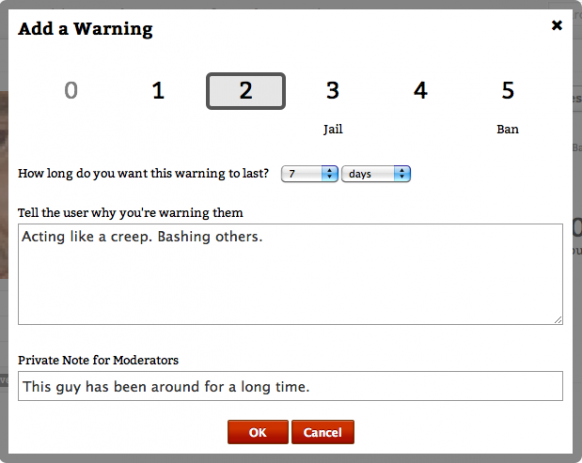 3. If the warning level is at 3 or above, the member is ‘jailed’ for the duration of the warning. Being jailed reduces a member’s abilities. A jailed member cannot start discussions, cannot display a signature and can only comment once every 2.5 minutes.

4. Warnings can be deleted or expired pre-maturely by clicking on the X next the given warnings on the profile page.

Warnings are available on all Vanilla hosted price plans.

When Vanilla introduced Reactions and Badges, members were able to earn a reputation score based on their contributions and based on others’ reactions. The Ranks feature lets you assign a publicly visible rank to members for having accumulated that score. (Moderators and admins can manually assign a rank.) It also lets you restrict the  abilities of members based on rank.

Here’s how it works:

1. Enable the plugin from the ‘Add-ons’ page in your Dashboard. You’ll see a new menu item in the Dashboard under Reputation. There you’ll be able to create Ranks or edit the defaults.

2. Create or edit Ranks to set the level, label, criteria, and abilities. You can also add some custom CSS to the Rank which lets you do things like display an image next to a users with a certain rank. Abilities include starting a discussion, editing posts, creating a poll, having a signature and having a user title. 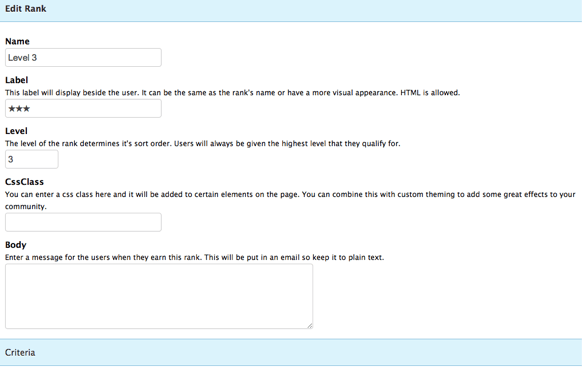 The Ranks feature is available on Vanilla’s Advanced and Enterprise plans.

Our Badges and Reactions gamification feature has been a big success. By popular demand reactions are now public. This prevents members from abusing Reactions under the cover of anonymity. Reactions can be reverted to anonymous by going to the Reaction settings in the Dashboard.

Vanilla has had a read-only ReSTful API for some time, but until now, no formal way to access any write methods. This all changes with Simple API. Now developers can access Vanilla’s write methods using an access_token configured in the dashboard. For more information, please visit: http://blog.vanillaforums.com/api/