Welcome to the magical world of Gaming Communities. It’s a treasure trove of members with peculiar superpowers that makes for a diverse forum. This bingo card was specially created for community managers in the gaming world. Print your own copy and cross out each archetype as you encounter them on your epic adventure into the world of people talking about videogames. Keep reading for more information on these archetypes: 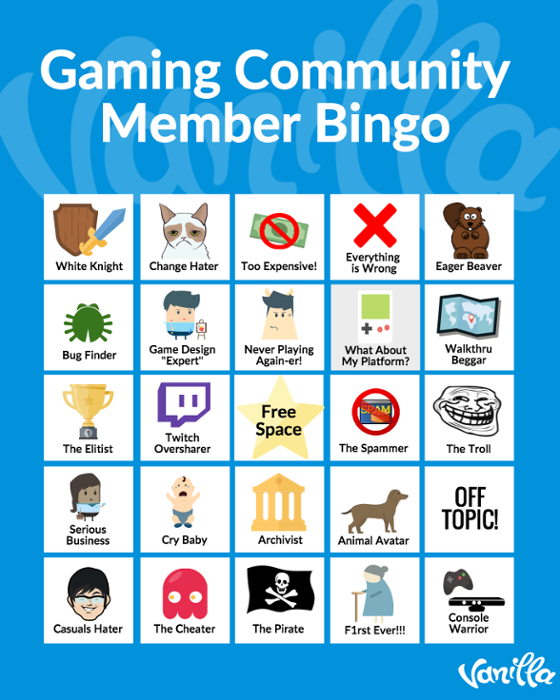 A change, no matter how insubstantial, has completely ruined this player’s ability to enjoy your game. Indeed, life is barely worth living now that The Omega Cannon does .0002% less (or more) damage.

A player is stunned, stunned to discover that you are planning to charge money for something. It doesn’t matter how big the product, or how small the price, this player is still taken aback by your profligacy.

This player, who plays 40 hours a week, lets you know that there is absolutely nothing about your game that is positive. Every possible thing you could have done wrong, you have done wrong. And the game sucks SO MUCH.

This player is the most enthusiastic person in your community. They’ll give an answer to any support ticket, volunteer for any task and give their opinion on absolutely everything. They’ll be a hugely positive person, always coming up with useful suggestions for you.

Needless to say, you’ll hate them utterly and without remorse.

You have a player who is great at finding bugs. Infuriatingly great. They are the bug whisperer, and your developers are tearing their hair out at the ramifications of their superpower.

A player, who has never designed a game, tells you in great detail the simple design principles you need to put in place to improve yours. Underline this checkbox if they tell you how the developers should do their jobs.

That last thing you did? Whatever it was? It was the last straw. This player is never playing again, under any circumstances. Enjoy the week of peace before they come back.

What About My Platform:

This player is confused as to why your sprawling, 7-act RPG with fully motion captured cutscenes starring the ghost of Laurence Olivier is not available on Game Boy Advance. Apparently you just don’t care about real gamers…

A member of your community rides to your aid against the hated brigands who would dare to slur your name. Prepare to be surprised at how annoying this becomes over time, as the flame war enters its third season.

This player had been playing games since 1832 using nothing but two coconuts flown in by unladen swallows, and isn’t afraid to let you know. They’re also better than every other player, and aren’t afraid to let them know. If you aren’t ranked top 3 in every game in the world, you’re useless to this player. Frequently a member of The PC Master Race.

Have you seen this player’s Twitch? You’re going to. They love their Twitch, and they’re sure you will too. It’s in the signature and every one of their posts. They’re determined to make gaming a career, and your community is a rung on their ladder to e-fame. Don’t you dare stand in their way.

This player isn’t necessarily selling anything, they just can’t stop hitting the post button. They have never had an unexpressed thought, and never plan to. You’ll have plenty of thoughts about them that you’re not allowed to express though...

Some players just want to watch the world burn. This space is for the classic troll, not just an angry insulter. When a player expertly throws a piece of bait into the water and watched the churning water, you can check off this space.

For this player, your game is Serious Business. Their rage at people treating it as though it’s some kind of game will be disproportionate. These players are often seen shaking their head with annoyance at a player who hasn’t read the entire wiki for every single mission.

This player is being treated unfairly. By everyone. All the time. No one acknowledges their many accomplishments, pays them the attention they deserve or is running the world sufficiently for their benefit. The only thing they like about life is the report button, which you are considering having electrified.

This player knows everything, everything about your game. They probably contributed to (or started) the wiki for it, and know more about the lore and gameplay mechanics than the devs do. They can be a great contributor, but fear the Archivist that crosses over with Serious Business or The Elitist...Also will bring up old content from Archive.org...

This player has a picture of an animal as their avatar. It could be a dog, gerbil, parrot, ostrich or ferret. You may be tempted to ask them about this animal. Do not ask them about it. You are not ready for the amount of detail you will receive about their pet, or the pictures of their ostrich dressed as Mal Reynolds that will result.

This player will talk about anything, anything but your game. They stopped playing a while ago, but love your community so much that they don’t want to leave. There is no topic so focused that they will not attempt to make it about the pie they just ate, or their favourite Green Day album, or what their cat’s cutest sweater is.

A friend of The Elitist and Serious Business, this player despises the hated Casual Gamer. Anyone who admits to playing a mobile game, or not dedicating the requisites five hours a day to your game is clearly a grandmother and should stop clogging up the internet.

This player is shocked, shocked that you would dare to accuse them of using hacks. They came to their 110% accuracy rating honestly, and no amount of proof will get them to admit it. I mean, ok maybe ONCE, they used a wall-hack, but it was their little brother that installed it. They have no idea. This is The Fugitive all over again.

Just because this player didn’t spend a dime on your game, doesn’t mean there’s any excuse for you not supporting them. This player is often revealed when a cunning developer hides a bug that only shows up in pirated copies. Their salty tears are delicious.

This player is the first to post in a thread. They are very proud of this. They attempt to do it on every thread. It would be only fitting for them to be the first person to be fired into the sun.

[bctt tweet="It would be only fitting for them to be the first person to be fired into the sun."]

This player knows the truth: that when you buy a console you’re enlisting in a war. Every other console is for cowards and brigands, and their failure to follow The One True Console is not acceptable. When the console wars are won, those who failed to take a stand will be shot as collaborators.

Looking for more games community content? Try our Gaming Community Playbook. It's free, and has a neat picture on it.

Send us an email to pr@vanillaforums.com with your topic idea and we'll circle back with our publishing guidelines.