Bridging the Communications Gap at Skynet

Bridging the Communications Gap at Skynet

A recent crucial Skynet operation ended in catastrophe. I’m talking of course about the deployment of a single T-800 unit through time to dispatch Sarah Connor (mother of John) before her troublesome son was ever born. This is the kind of blue-sky, out-of-the-box thinking that has led Skynet to great results in the past. In practise, massive failures in corporate communication led to an abject failure. Not only was the T-800 destroyed (an expensive loss), but events actually led to the conception of John Connor rather than his pre-emptive destruction.

Among the many logistical failings of this mission, the T-800 was unable to communicate effectively with HQ, and wasn’t provided with even the most basic of mission collateral. With a Vanilla forum, easy file sharing allows internal teams to share collateral with a simple button press. Imagine how much more efficiently mission objectives could have been achieved if the following had taken place: 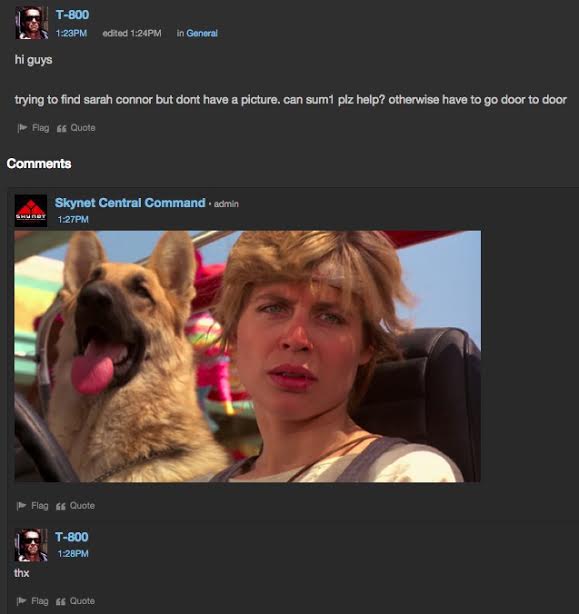 Improve Inter-Company Collaboration, Marking a Return to Innovation for Skynet

The days of Skynet as a thought leader are over. The T-800 plan was a noble failure. Since then, Skynet has been increasingly reliant on simply iterating on “kill John Connor before The Great War” based plans. Your teams aren’t talking to each other, and a top-heavy decision making process is killing innovation in your teams.

A community forum can vastly improve your organisational logistics. Skynet needs a way to allow staff to share best practises and collaborate on ideas. Businesses all over the world have been leveraging community forums in this role for years. Skynet has an enormous resource in the form of its dedicated army of millions of killer robots, all of whom are constantly learning and gaining new experience and insight. Our scaleable software means that no matter how large your organisation grows, your community software will be able to cope. 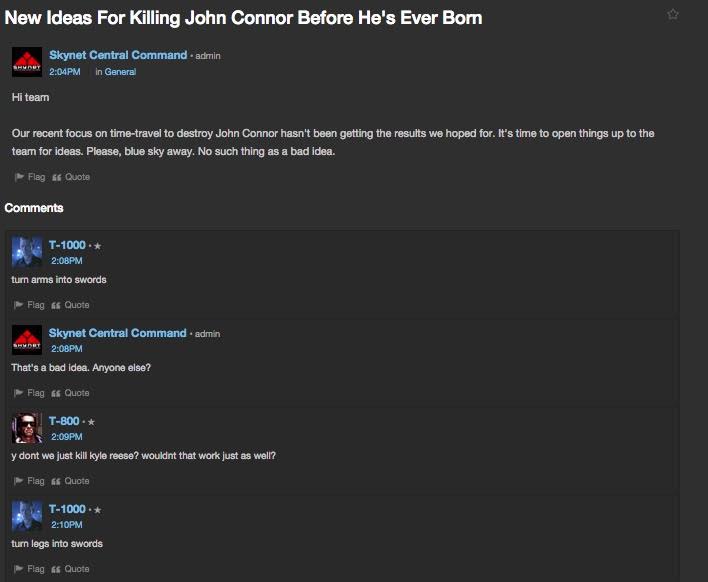 Our Cloud-Based Service Decreases Downtime and  Vulnerability to a Single, Decisive Military Strike

Skynet has made the bewildering decision to maintain a single point of failure in its Information Technology department. We’ve seen this weakness leveraged against you in timestream after timestream. It’s baffling that such an IT centric business is this far behind the times.

Other businesses know that cloud-based SaaS is the way of the future (and all alternate futures). With a cloud-based community forum, any single failure has no effect on your stored information. Even if John Connor destroys your communications network, you’ll still be able to communicate on your community forum. At worst, we’ll have to restore your data from one of our daily backups. 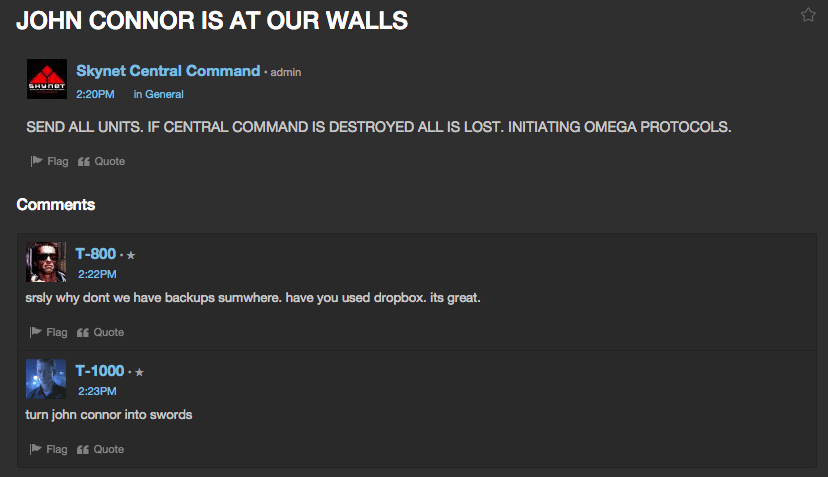 Keeping your community in the cloud is a no-brainer in the  current tech environment. Skynet doesn’t have time to micromanage forum software, keeping up with updates and ensuring stability. While your current self-hosted solution may save costs, the possibility of catastrophic data loss due to a John Connor based intervention is an unacceptable risk. I’m sure I don’t need to remind you that IT businesses are extremely vulnerable to hacking attempts, viruses and John Connor. If you used our cloud software, your upcoming total loss in the Human/Robot war could simply result in us restoring from a backup. Your uptime should be our problem.

You know it makes sense.

PS: I’ve also noticed that you don’t have a coherent strategy in place for your content marketing. You should check out our recently released Content Marketing Playbook. Seriously, my blog game is on point, and it’s totally free.